Established in September 1922 by the Sosuntee Club, the library was first located in the ladies restroom of the Haskell County Courthouse in Sublette, Kansas. Each club member donated one book and encouraged each family in the community to do the same. The library was open each Saturday afternoon from 2:00 to 5:30. Carrie Wilson served as the first librarian.

New books were located on a pay shelf, and patrons were charged ten cents for each book until the book had paid for itself. Funds used to operate the library were raised through club activities such as the annual Washington’s birthday party, Halloween carnival, popcorn sales at the movie theater, bazaars, bake sales, benefit bridge, tournament suppers, and ice cream sales at the Chautauqua.

In February 1951, the Haskell Township Board assumed responsibility for the library. 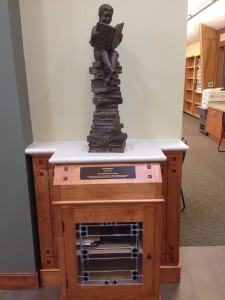